Making an Impact through Composting

Making an Impact through Composting 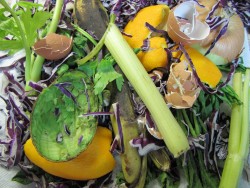 Food waste is a serious and mounting problem.  Approximately 40 percent of food in the U.S. goes to waste.  According to the U.S. EPA, 37.06 million tons of food waste went to the landfill in 2013. Not only is this tremendously wasteful but it’s also tremendously damaging to our environment. When food waste breaks down in landfills, it releases methane, a greenhouse gas that has a global warming potential 23 times greater than carbon dioxide.  That means it’s 23 times more destructive to the atmosphere.

The Reserve’s Organic Waste Composting Protocol aims at diverting food waste and food-soiled paper from municipal sources and grocery stores that is headed towards landfills.  Projects registered under this protocol – and all Reserve protocols – go above and beyond business as usual practices. That means that without the protocol and a market for carbon offsets, food waste from these projects would have most likely gone to the landfill. So far, the Reserve has issued 428,562 offset credits to composting projects, which is the equivalent to removing 90,224 cars from the road for an entire year.  Plus, using the compost created from organic waste composting projects improves soil health and reduces the need for applying fertilizers and pesticides.

A large percentage of food waste comes from sources like grocery stores, farms and restaurants, but consumers also contribute to the problem.  This means there’s also tremendous potential to reap environmental benefits from composting at an individual level. Read about our staff’s adventures in composting below!

Jennifer W:
In Seattle, which is the city I call home, residences and commercial properties have been required to divert food waste from the garbage since January 1, 2015.  Prior to implementing this city ordinance, Seattle sent approximately 100,000 tons of food waste to the landfill annually. Seattle Public Utilities estimates this new law will divert 38,000 tons of that food waste.  Plus, it will help the city achieve its goal of recycling and composting 60 percent of its waste this year.  To enforce this, residents will be fined $1 and businesses will be fined up to $50 for each violation of dumping food waste into their garbage starting January 1, 2016.

Cedar Grove, a local company, is one of two companies that turns the city’s food waste, food-soiled paper, paper towels, napkins and compostable food containers into compost. The compost is sold for professional and consumer use. And, until Seattle passed its city ordinance requiring composting, Cedar Grove had a project under the Reserve’s Organic Waste Composting Protocol. It’s satisfying knowing that you helped produce the compost that you can buy at the store.

Seattle is one of only a few cities that requires composting.  But composting doesn’t have to occur if it’s just mandated by law.  If more municipalities offered composting, the practice could become a way of life for more people and make a significant impact on methane emissions, not to mention all of the other benefits that come along with composting.

Of course, a better solution to stemming food waste is to not waste food in the first place by doing simple activities like not purchasing too much food, eating leftovers, using food scraps and properly storing food.  There is much to discuss in this area.  So much, in fact, that it could be another blog post…

Craig E:
I have been composting my food waste for about 15 years, including in Arlington, VA and now in LA. It has never been required, but I have found it an easy practice to undertake. My composting habits between Arlington and LA have been very different. In Arlington it was a more typical composting style that led to great soil I could add to my garden. In LA I didn’t want to have to worry about adding moisture to my composting operation so I converted a large green yard waste bin into my composting container. I am not sure how it happened, but my composting bin never needs turning and rarely needs emptying. The reason is a voracious population of grub worms that have taken over my composting bin and reduce everything in it to a lovely organic black slime. Anything that does not get eaten by my two teenagers or three dogs makes its way to the composting bin.

I have noticed that there is often confusion between recycling and composting that, frankly, can defeat the purpose of both. The confusion can happen among even those of us who are very environmentally aware. In our LA office, we do not have a way to compost, and compostable, food-containing items have found their way into the blue recycling bin. Yes, I know the materials are often recyclable, but if any materials thrown into a recycling bin are soiled by food, LA will discard those items as trash and not recycle them. That may not seem to make sense, but soiled materials (even if made out of recyclable material) foul recycling operations. So it’s important to always be mindful of the difference between recycling and composting and remember to either clean containers before throwing them into the blue recycling bin or toss them into the trash to avoid contaminating the entire recycling bin. Otherwise, we end up doing harm instead of good.